Gilbert Asa Davis Library Dedication Ceremony, Which on Account of the Crowd Commenced Inside the Felchville Baptist Church, July 4, 1899: An Interesting Description Judiciously Culled from The History of Reading Volume 2

“And well indeed may Reading rejoice, for on this festal day she has brought together citizens and friends to distinguish with fitting ceremony the most important single event in her history.

“I will say no more, lest I drift into a speech, and a speech have I none, though the order of the exercises—which has just been placed in my hands—bears at this juncture the ominous word ‘Speech,’ which I suppose may be ascribed to the partiality of some unkind friend.”

Next, the singing of “The Bobolink Song” by the children of the Reading Public Schools.

Mr. Keyes, again at the podium: “Permit me to introduce to you a gentleman who is known throughout the length and breadth of eastern Vermont as a ready speaker—whose services today were eagerly sought by other and more populous towns—who has done us the honor to put competing invitations aside—and who will now deliver the principal address of the day—The Honorable Frank Plumley.” [The author of The History of Reading writes that he was unable to obtain a copy of Mr. Plumley’s very fine speech.]

Mr. Thomas Curley, ex-mayor of Waltham, Mass., then delivered a speech of “great beauty and force.”

Next, a speech by the Rev. M. B. Parounagian, late of Armenia. An excerpt: “Fill that elegant building out yonder with good books, and use it not abuse it. Bad books, bad newspapers—choke them as soon as they get into your beautiful building. Teach our young people that if they go down into the swamps and marshes to watch their Jack o’ Lanterns dance on decay and rottenness, they will catch malaria and death.”

C. E. Ordway, a clergyman of distinction, followed with a speech “well received and timely.”

Mr. Keyes then drifted into a speech lasting several pages, after which he expressed these sentiments: “I wish to announce that the most widely known and best beloved son of Reading, he who has lived the longest, most useful, and serenest life of all her sons—I refer of course to the Rev. Thomas J. Sawyer—now lies upon a bed of sickness, from which his great age makes likely he may never arise. I know you are pained to hear this, and it seems to me eminently fitting and proper upon this occasion that his native town send him some message expressive of kindly interest and affectionate regard. I await your pleasure.”

Following a resolution and voice vote, a dispatch was sent to Mr. Sawyer. The author of The History of Reading writes, “It was the last thing read to him. He understood perfectly, and was peculiarly touched and pleased by this message from his native town.” 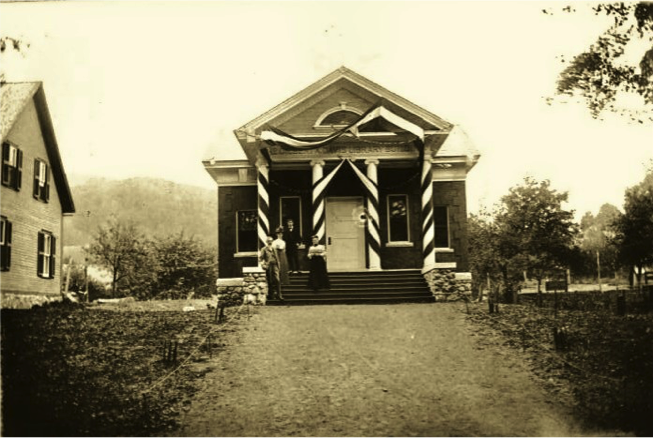 The dedication ceremony resumed with those assembled crossing the street from the Baptist church to the library yard, but “on account of the intense heat of the day, were kindly invited by Mr. T. E. Conant to occupy his shady yard opposite, which was done.”

Mr. Keyes again: “In behalf of the church-going people of this community, Miss E. H. Goldthwait, pastor of the Felchville Universalist church, was to have made response. And it is with regret that I announce her unavoidable absence. She has, however, put in writing what she desired to say. Dr. F. C. Morgan will read the text.”

After the reciting of Miss Goldthwait’s speech, a member of Felchville Lodge, No. 62, I. O. O. F., was introduced by Mr. Keyes thus: “They have established here a lodge of the Independent Order of Odd Fellows. The Order has proved itself to be of great benefit to mankind. I do not have the honor of membership, but I freely give my testimony to its merit and worth.”

Following a brief appearance at the podium by the I. O. O. F. representative, this from Mr. Burton M. Newton, Chairman of the Board of Selectmen: “After listening as you have to these most eloquent speeches, it would be a failure upon my part to even attempt to say anything further of interest relative to this dedication. But I, in behalf of the Board of Selectmen, in behalf of every man, woman, and child of this town . . . [etc.]”

“This closes,” said Mr. Keyes, “the formal exercises of the day. But before closing, and though the list of donors is altogether too long for me to read to you at this time owing to the lateness of the hour, I cannot refrain from mentioning a few.”

Garnering a mention from Mr. Keyes was a Mrs. Osborne, who promised a portrait of her late husband, who practiced medicine in the community more than a generation before; and a Mrs. Robinson, for promising a like portrait of the late Mr. Robinson, who succeeded Dr. Osborne as community physician.

The ceremony closed with the singing of “America” and the pronouncing of the benediction. 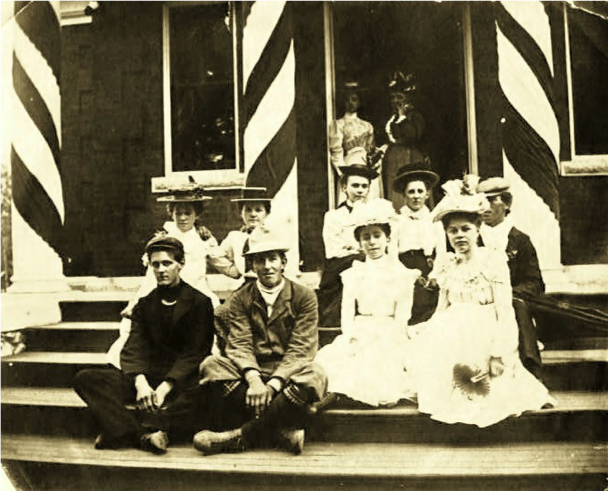