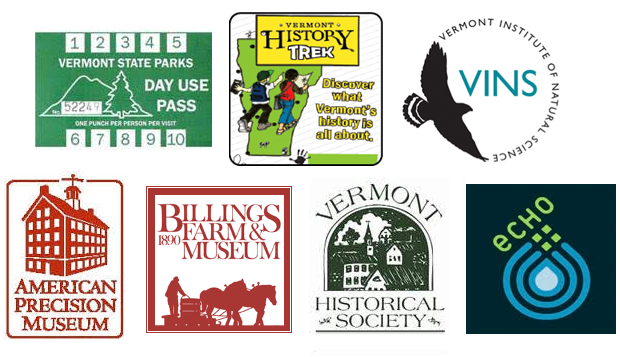 During warm months, the library offers a pass for many of Vermont’s state parks, good for free entry into designated park day-areas for up to eight people in one vehicle. The pass is good at Ascutney, Camp Plymouth, Wilgus, Silver Lake, and Thetford Hill state parks, among others. We have a similar pass for half a dozen Vermont historical sites, including Bennington Battle Monument, the Eureka Schoolhouse in Springfield, the Old Constitution House in Windsor, and the Calvin Coolidge Birthplace at Plymouth Notch. The passes are good until the parks and historic sites close for the season; those dates vary according to the rules of the individual park or site. We also have free passes available year round for the American Precision Museum in Windsor, the Billings Farm & Museum in Woodstock, and the Vermont History Museum, with branches in Montpelier and Barre; and we have reduced-price passes for Echo Aquarium and Science Center in Burlington and for the Vermont Institute of Natural Science (VINS) in Quechee. Passes can be checked out for two days at a time.